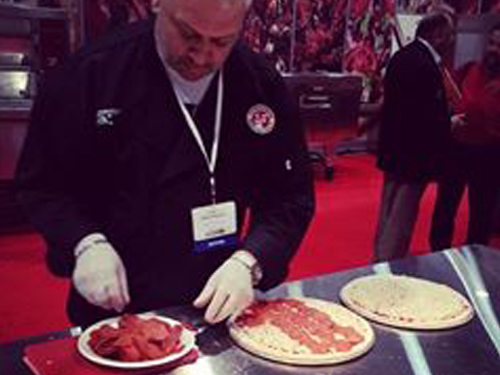 Bexley Pizza Plus has been serving Bexley’s favorite pizza since 1980. That year Don Schmitt opened his tiny pizzeria in a 900 sq ft building in the 2500 block of E. Main St. His pizza soon became a hit as Bexley, Berwick and Eastmoor residents ordered it for pick-up or delivery in droves. In 1994 Don partnered with his long-time manager, Brad Rocco, and they expanded their menu to include over 40 pizza toppings and over 20 signature specialty pizzas. Soon after, they garnered many awards and accolades including their victories in the 2003 & 2006 NAPICS Pizza Pizzazz contest that won them spots on the U.S Pizza Team. They competed in the World Pizza Championship in Salsamaggiori, Italy both years and were featured on the Food Network in 2004.

In 2006 they relocated their pizzeria down the street, where they expanded their menu again, opened a dining room and offered beer and wine. In 2014 Brad’s “Ultimate Pizza” won the International Pizza Challenge in Las Vegas, where he out-baked 60 pizziolas from around the globe. So when you come to Bexley Pizza Plus and order some of their award-winning pizza, you will get, not only one of the areas top pizzas, but one of the best pizzas in the world!